Print these questions and use them to lead a discussion about The Brass Verdict. SPOILER WARNING! This guide does address the entire book. Do not read it if you have not read the book.

“It’s called rope a dope.”
The Brass Verdict begins with a courtroom scene from 1992 with Mickey Haller for the defense, against Jerry Vincent, for the prosecution. Mickey refuses to compromise his ethics when Vincent asks him for a favor. Yet at the same time, Mickey is defending a man who is clearly guilty of murder. Mickey ends up winning the case and the murderer goes free. How do you reconcile Mickey’s personal ethics with the reality of being a defense attorney?

“Everybody lies.”
That’s the opening line of The Brass Verdict. Is Mickey cynical and bitter or a realist and insightful? Do you agree with Mickey’s statement that a trial is a contest of lies?

“There’s nothing you can do about the past, Patrick. Except keep it there.”
Mickey is making a comeback as a lawyer after a year spent in rehab and recovery. What did you think of his relationship with his driver, Patrick Henson, another recovering addict? Why do you think Mickey wanted to help him?

“I never met him before today but the name…I know the name.”
Mickey Haller met Harry Bosch for the first time in The Brass Verdict. Did you know about their family connection before you read the book? How are these two half-brothers alike? How are they different?

“I’ve been waiting five months to clear my name.”
When you first read about Walter Elliot’s case and his adamant claims of innocence, did you believe him? How about later, after he told Mickey about his mob connections? Did you believe that story?

“It was only at times like this with my daughter that the distance I had opened in my life came closed.”
Mickey’s relationship with his ex-wife, Maggie McPherson, is strained because of his past drug abuse. He was trying to earn back her trust and improve his relationship with his daughter. Do you think he was successful? Can you make any predictions for their future?

“I’m in.”
Mickey decided to work with Bosch to draw out the killer. Why do you think he was willing to do that when he didn’t seem to trust Bosch? Did his theory that everybody lies end up applying to Bosch too in the end?

“Do you know you look a lot like your father?”
We saw Harry Bosch through Mickey Haller’s eyes. What kind of impression did Bosch make on Mickey? Do you think they liked each other?

“I guess that makes us flip sides of the same mountain.”
In the end, Mickey said that he and Harry were flips side of the same mountain because they live on opposite sides of the Santa Monica Mountains, also known as the Hollywood Hills. You could say their father was a mountain of a man in terms of fame and character. Neither really knew their father. What kind of effect do you think that had on each of these men?

“You could say the brass verdict was my last verdict.”
Whether you approve of the job or not, did you admire Mickey’s skill as a defense attorney? Do you think he is really going to quit? 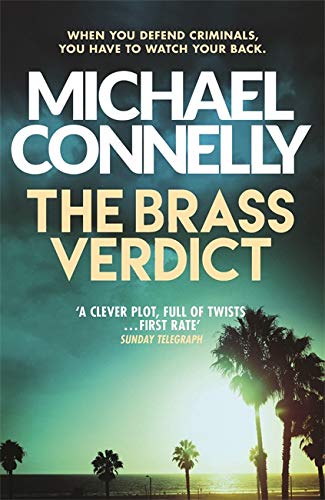