The Law Of Innocence Excerpt

A murder case is like a tree. A tall tree. An oak tree. It has been carefully planted and cared for by the state. Watered and trimmed when needed, examined for disease and parasites of any kind. Its root system is constantly monitored as it flourishes underground and clings tightly to the earth. No money is spared in guarding the tree. Its caretakers are granted immense powers to protect and serve it.

The tree’s branches eventually grow and spread wide in splendor. They provide deep shade for those who seek true justice.

The branches spring from a thick and sturdy trunk. Direct evidence, circumstantial evidence, forensic science, motive and opportunity. The tree must stand strong against the winds that challenge it.

And that’s where I come in. I’m the man with the ax. My job is to cut the tree down to the ground and burn its wood to ashes.

It had been a good day for the defense. I had walked a man right out of the courtroom. I had turned a felony battery charge into a righteous case of self-defense in front of the jury. The so-called victim had a history of violence of his own that both prosecution and defense witnesses, including an ex-wife, were eager to describe on cross-examination. I delivered the knockout punch when I recalled him to the witness stand and led him down a path of questioning that put him over the edge. He lost his cool and threatened me, said he’d like to meet me out in the street where it would be just him and me.

“Would you then claim I attacked you like you have in this case?” I asked.

The prosecutor objected and the judge sustained. But that was all it took. The judge knew it. The prosecutor knew it. Everybody in the courtroom knew it. I notched the NG after less than half an hour of jury deliberation. It wasn’t my quickest verdict ever, but it came close.

Within the informal downtown defense bar there is a sacred duty to celebrate a not-guilty verdict the way a golfer celebrates a hole in one at the clubhouse. That is, drinks all around. My celebration took place at the Redwood on Second Street, just a few blocks from the civic center, where there were no fewer than three courthouses to draw celebrants from. The Redwood was no country club but it was convenient. The party—meaning the open bar—started early and ended late, and when Moira, the heavily tattooed bartender who had been keeping the tab, handed me the damage, let’s just say I put more on my credit card than I would ever see from the client I had just set free.

I had parked in a lot on Broadway. I got behind the wheel, took a left out of the lot and then another to put me back on Second Street. The traffic lights were with me and I followed the street into the tunnel that went under Bunker Hill. I was halfway through when I saw the reflection of blue lights on the tunnel’s exhaust-smoked green tiles. I checked the mirror and saw an LAPD cruiser behind me. I hit the blinker and pulled into the slow lane to let him pass. But the cruiser followed my lead into the same lane and came up six feet behind me. I got the picture then. I was being pulled over.

I waited until I was out of the tunnel and took a right onto Figueroa. I pulled to a stop, killed the engine and lowered the window. In the Lincoln’s side-view mirror I saw a uniformed officer walking up to my door. I saw no one else in the patrol car behind him. The officer approaching me was working alone.

“Can I see your license, car registration and proof of insurance, sir?” he asked.

I turned to look at him. His nametag said Milton.

“You sure can, Officer Milton,” I said. “But can I ask why you pulled me over? I know I wasn’t speeding and all the lights were green.”

“Well, I guess you’ll eventually tell me. My license is in my pocket inside my coat. The other stuff is in the glove box. Which do you want me to go for first?”

“Let’s start with your license.”

As I pulled my wallet and worked the license out of one of its slots, I reviewed my situation and wondered if Milton had been watching the Redwood for lawyers exiting my party and possibly too tipsy to drive. There had been rumors about patrol cops doing that on nights when there was an NG celebration going on and defense lawyers could be picked off for a variety of moving-vehicle violations.

I handed Milton my license and then went for the glove box. Soon enough the officer had all he had asked for.

“Step out of the car, sir,” Milton said.

“Please step out of the car.”

I threw the door open, aggressively forcing Milton to take a step back, and got out.

“Just so you know,” I said. “I spent the last four hours in the Redwood but I didn’t have a drop of alcohol. I haven’t had a drink in more than five years.”

“Good for you. Please step to the back of your vehicle.”

“Make sure your car camera is on because this is going to be embarrassing.”

I walked past him to the back of the Lincoln and stepped into the lights of the patrol car behind it.

“You want me to walk a line?” I said. “Count backward, touch my nose with my finger, what? I’m a lawyer. I know all the games and this one is bullshit.”

Milton followed me to the back of the car. He was tall and lean, white with a high and tight haircut. I saw the Metro Division badge on his shoulder and four chevrons on his long sleeves. I knew they gave them out for five years of service each. He was a veteran Metro bullethead all the way.

I looked down at the rear bumper of the Lincoln. There was no license plate.

“Goddamn it,” I said. “Uh…this is some kind of a prank. We were celebrating—I won a case today and walked my client. The plate says iwalkem and one of those guys must’ve thought it was a joke to steal the plate.”

I tried to think about who had left the Redwood before I did, and who would have thought this was a funny thing to do. Daly, Mills, Bernardo…it could have been anyone.

“Check the trunk,” Milton said. “Maybe it’s in there.”

“Sir, you’re not making a call until we’re finished here.”

“That’s bullshit. I know the law. I’m not in custody—I can make a call.”

I paused there to see if Milton had any further challenge. I noticed the camera on his chest.

I started moving back to the open door.

“Sir, stop right there,” Milton said from behind me.

He snapped on a flashlight and pointed the beam down at the ground behind the car.

I stepped back and looked down at the cracked asphalt. The officer’s light was centered on a blotch of liquid beneath the bumper of my car. It was dark maroon at the center and almost translucent at its edges.

Just as I said it we both saw another drop come down from the bumper and hit the asphalt.

“Sir, open the trunk, please,” Milton demanded as he put the flashlight into a belt holster.

A variety of questions cascaded through my mind, starting with what was in the trunk and ending with whether Milton had probable cause to open it if I refused to.

Another drop of what I now assumed to be bodily fluid of some sort hit the asphalt.

“Write me the ticket for the plate, Officer Milton,” I said. “But I am not opening the trunk.”

“Sir, then I am placing you under arrest,” Milton said. “Put your hands on the trunk.”

Milton moved in on me, grabbing me and spinning me toward my car. He threw all of his weight into me and doubled me over the trunk.

One by one my arms were roughly pulled behind my back and I was handcuffed. Milton then put his hand into the back collar of my shirt and jacket and yanked me up off the car.

“You’re under arrest,” he said.

“For your safety and mine I’m putting you into the back of the patrol car.”

He grabbed my elbow to turn me again, and walked me to the rear passenger door of his car. He put his hand on top of my head as he pushed me into the plastic seat in the back. He then leaned across to buckle me in.

“You know you can’t open the trunk,” I said. “You have no probable cause. You don’t know if that’s blood and you don’t know if it’s coming from the interior of the car. I could’ve driven through whatever it is.”

Milton pulled back out of the car and looked down at me.

“Exigent circumstances,” he said. “Someone in there might need help.”

He slammed the door. I watched him go back to my Lincoln and study the trunk lid for some sort of release mechanism. Finding none, he went to the open driver’s door and reached in to remove the keys.

He used the key fob to pop the trunk, standing off to the side should someone come up out of the trunk shooting. The lid went up and an interior light went on. Milton supplemented it with his own flashlight. He moved from left to right, stepping sideways and keeping his eyes and the beam on the contents of the trunk. From my angle in the back of the patrol car, I could not see into the trunk but could tell by the way Milton was maneuvering and bending down for a closer look that there was something there.

Milton tilted his head to talk into the radio mic on his shoulder and made a call. Probably for backup. Probably for a homicide unit. I didn’t have to see into the trunk to know that Milton had found a body. 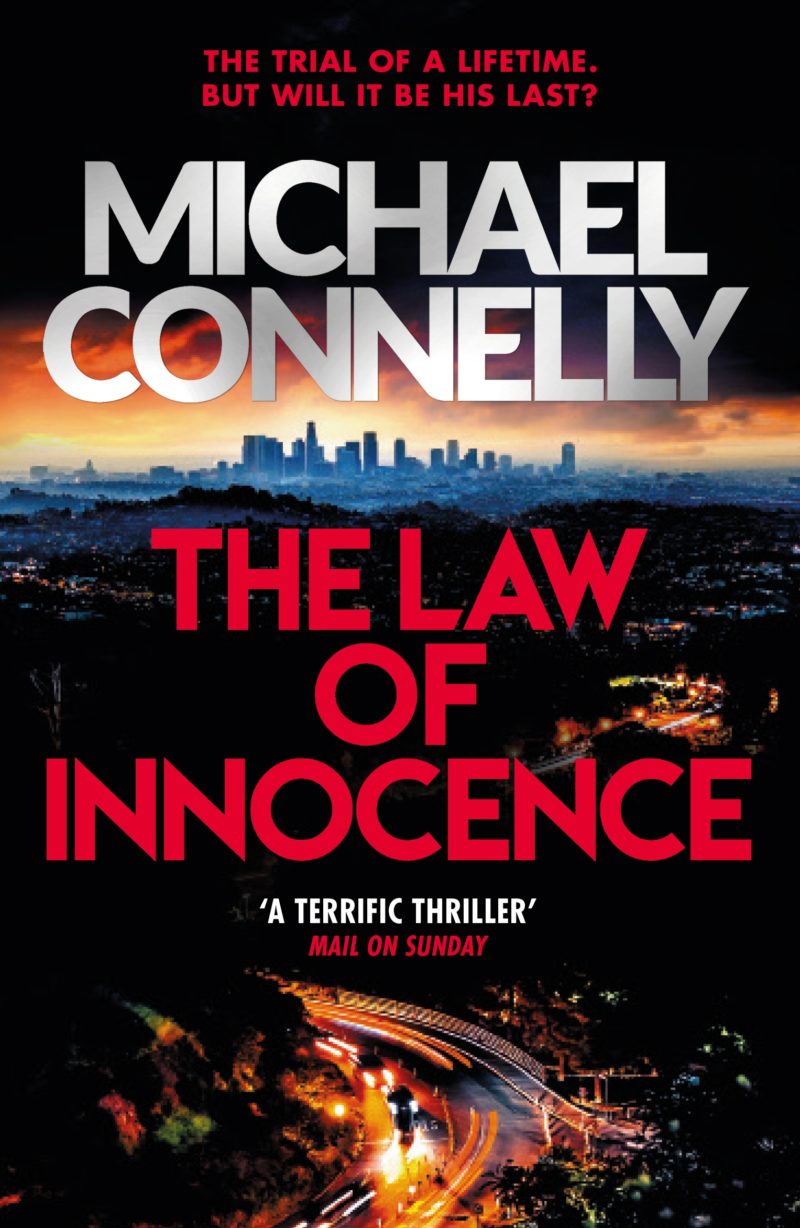 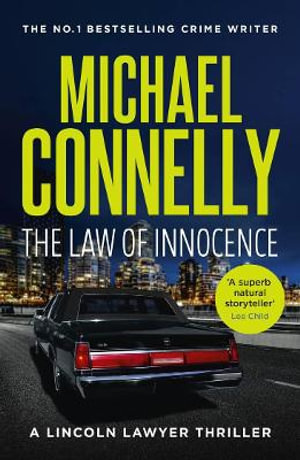