“Connelly’s own roots in the newspaper business run deep, and he is at his best when he’s showing reporters digging for a complex story. Combine that with a genuinely nightmarish scenario, and you have a truly terrifying thriller.”
– Bill Ott, Booklist Starred Review

“Connelly is in terrific form here, applying genre conventions to the real-life dangers inherent in the commercial marketing of genetics research. In the same way, he uses McEvoy’s descent from crack investigative reporter to website hack as a way to mourn the fourth estate.”
– Marilyn Stasio, New York Times

“Utterly compelling and tinged with loss, this is Connelly at the peak of his powers.”
– John Williams, Daily Mail (UK)

“As ever, Connelly is an astute commentator on American society… More literary caviar from Connelly.”
– Barry Forshaw, Financial Times

“Fair Warning is a chilling, of-the-moment crime story you won’t be able to put down.”
-Dwyer Murphy, CrimeReads Editor-in-Chief

“…my goodness, he’s stumbled on an amazing story. From a murdered young woman to a mind-boggling extrapolation of the dark destinations that DNA testing might lead to…”
– The Times Crime Club (UK)

“Another pulsating outing for Connelly’s never-say-die journalist sleuth Jack McEvoy, Fair Warning uncovers a sadistic serial killer who has hunted undetected for years. Pacy, violent and heart-stoppingly suspenseful, this is one of the world’s premier crime writers on top form.”
– Waterstones

“What separates Connelly from the competition is his interest in the blockbuster moments as much as the cartilage that binds them. He delivers authenticity as well as pulse-pounding suspense. Fair Warning is a methodical procedural, pockmarked with insights about the changing shape of journalism and warnings about the current state, and future, of genetic testing. And its denouement hints there’s more to come from Jack. Hopefully we’re not waiting another ten years for the next installment. Or maybe we can have the Bosch / Ballard / McEvoy / Haller crossover dreams are made of.”
– Simon McDonald (Australia)

“…the final hundred pages of this unnerving novel are as exciting as anything Connelly has written.”
– The Times (London)

“A first-rate case for Connelly’s third-string detective, bulldog journalist Jack McEvoy, who’s been biding his time since The Scarecrow (2009) as Harry Bosch and the Lincoln Lawyer have hogged the spotlight. …Jack works the case with a dogged professionalism, a mastery of detail, and a scarred but oversized heart that puts most of his police procedural cousins to shame.”
– Kirkus Reviews Starred Review

“The long-awaited third installment in Michael Connelly’s Jack McEvoy series… the author also has real experience with podcasting, making Fair Warning feel lived in and up to the moment, even though it’s been 11 years since the last book in the series. Bravo to Connelly for finding the perfect way to bring a great character out of retirement!”
– Apple Books

“Score another one for the dean of America’s crime writers.”
– Denver Post

“[A] fast-paced thriller, written by a master of the genre.”
– Christina Ianzito, AARP

“here is a writer, a journalist, who’s committed to the truth — and who knows how to tell a hell of a story. “
– BookTrib

“The new thriller from America’s crime master rips along to a crescendo that blows your socks off. …Connelly, a superb writer, builds the tension to screaming point. It brilliantly heralds a new McEvoy/Walling series.”
– Alex Gordon, Peterborough Telegraph (UK)

“This is dangerous, sometimes creepy stuff, and Connelly manages to make a salient point about the importance of good journalism at the same time that he drives his plot to a satisfying end.”
—Chris Schluep, Amazon Book Review 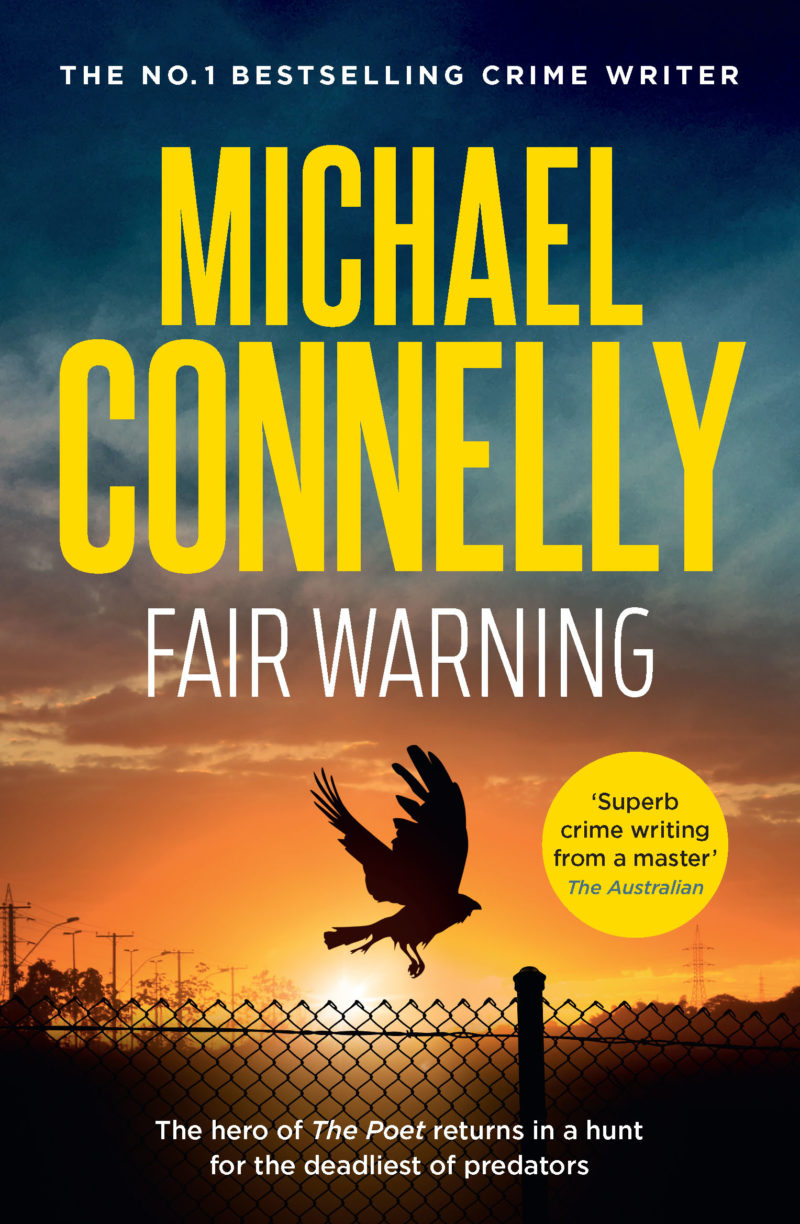