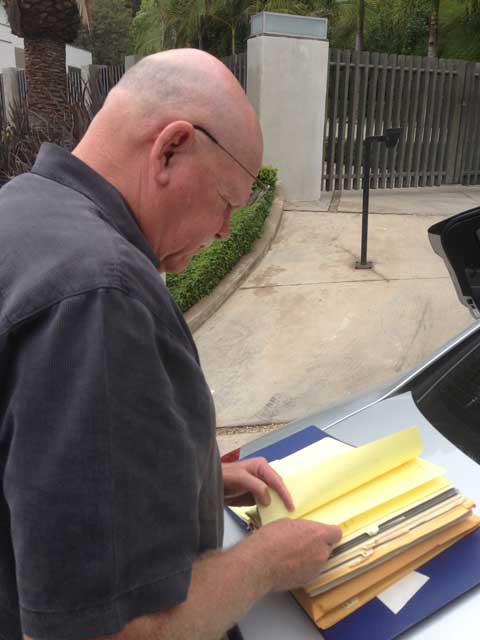 Rick Jackson stands in front of a house on Rising Glen Drive at the top of the Hollywood Hills where the Realtors say the houses have jetliner views. It is his last day as a homicide detective with the Los Angeles Police Department. Retiring after 35 years on the force, most of them spent in homicide, he has returned to the scene of the first murder case he ever worked. He has the thick blue murder book that contains all the photos and records accumulated since he was called to the house on Oct. 9, 1981 to investigate the murder of Wilbur Wright, owner of a popular chain of upscale ice cream stores. The visit is half nostalgic, half hopeful in the idea that finally something will spring loose – an idea, a clue, a direction.

He studies the photos and the diagrams he drew of the crime scene so long ago. But it’s not to be today. Rick will retire and turn the murder book over to another detective, the case still open and unsolved. He has cracked dozens and dozens of murders in the City of Angels over the last four decades but it is the open cases that still haunt. “Sorry, Wilbur,” he says to himself. “Maybe somebody else will solve this one after I’m gone.”

It is unlikely. No one cared about his cases as much as Rick Jackson. It is end of watch for a consummate homicide man, one of the models for the fictional character of Harry Bosch. I thank Rick Jackson for his service to the community of Los Angeles as well as to me as an author just trying to get the world – his world – right in my stories. Somehow, through all of the years and all of the horrible cases, Rick has maintained his humanity and his humor. There is no one I know who carries Harry Bosch’s code as well as he – that everyone counts or no one counts. For that I will always be grateful. I hope that when it’s Harry’s time to pull the pin he does it with the same grace and dignity.