“It is Connelly’s descriptions and Bosch’s investigation that help make TWO KINDS OF TRUTH one of the author’s most intriguing books in a consistently brilliant career. …Bosch and Haller have fans beyond the literary environs of the Connelly novels, thanks to Haller’s cinematic turn and Bosch’s presence on streaming television. The really good stuff, though, remains between the covers of these books, and TWO KINDS OF TRUTH is a sterling example of the full potential of both characters fully realized.”
– Joe Hartlaub, BookReporter.com

“This is a book you want to read ravenously, but also to savour and stretch out for as long as possible. It left me with a feeling of regret that it had ended – a sure sign of a bloody good read. …Michael Connelly is an artist of words, and this book is among his best.”
– CrimeFictionLover.com

“It is a reflection of Connelly’s talent that after 19 books chronicling Bosch’s career, this iteration feels fresh and authentic. This is Bosch at his F-you best, pursuing his mission, seeking justice and speaking for the dead.”
– Robert Anglen, Arizona Republic

“Undercover thriller, courtroom drama, locked room mystery. The menace of drug rings and the menace of venal DAs and Rat Squad cops. And Harry Bosch, whose character remains as deeply compelling as ever. Michael Connelly remains the best in the business.”
– Michael Carlson, Irresistible Targets

“Connelly is one of the few authors who can use the idea of truthiness as a springboard for a gripping thriller about corruption, opioids, politics and the minutiae of a police investigation. …It’s become an annual refrain — but Connelly truly is one of the finest mystery writers. And that’s the truth.”
– Oline Cogdill, SouthFlorida.com

“The real beauty of this series for me lies in its continued freshness, despite how long we’ve been along for the ride with Harry. Bosch has evolved over the series. He’s principled yet fallible, stubbornly loyal to those close to him. With a veteran character like this, it has to feel plausible that he’s still out there fighting the good fight after all these years, and that’s exactly what Connelly achieves.”
– Rob Scragg, Shots Crime & Thriller eZine

“Reading Connelly is like listening to a well-oiled machine purring softly, as if by magic and, once again, he makes the reading (and the writing) so easy, unshowy, intelligent and gripping. A crime author in full control of his craft!”
– Maxim Jakubowski, Crime Time

“Connelly remains atop the heap of contemporary crime writers thanks to his rare ability to combine master plotting and procedural detail with a literary novelist’s feel for the inner lives of his or her characters. Both talents are on abundant display this time.”
– Bill Ott, Booklist starred review

“This series, now twenty books in, just keeps getting better and better. Two Kinds of Truth is some of Michael Connelly’s finest work yet, and a real contender for best crime novel of the year.”
– The Real Book Spy

“the book unfolds with great urgency and a sense of righteous indignation, particularly about the opioid crisis (“Fifty-five thousand dead and counting”). The two truths of the title encapsulate Bosch’s world: “ truth that was the unalterable bedrock of one’s life and mission. And the other, malleable truth of politicians, charlatans, corrupt lawyers and their clients.” …a solid procedural sure to please his many fans.”
– Publishers Weekly 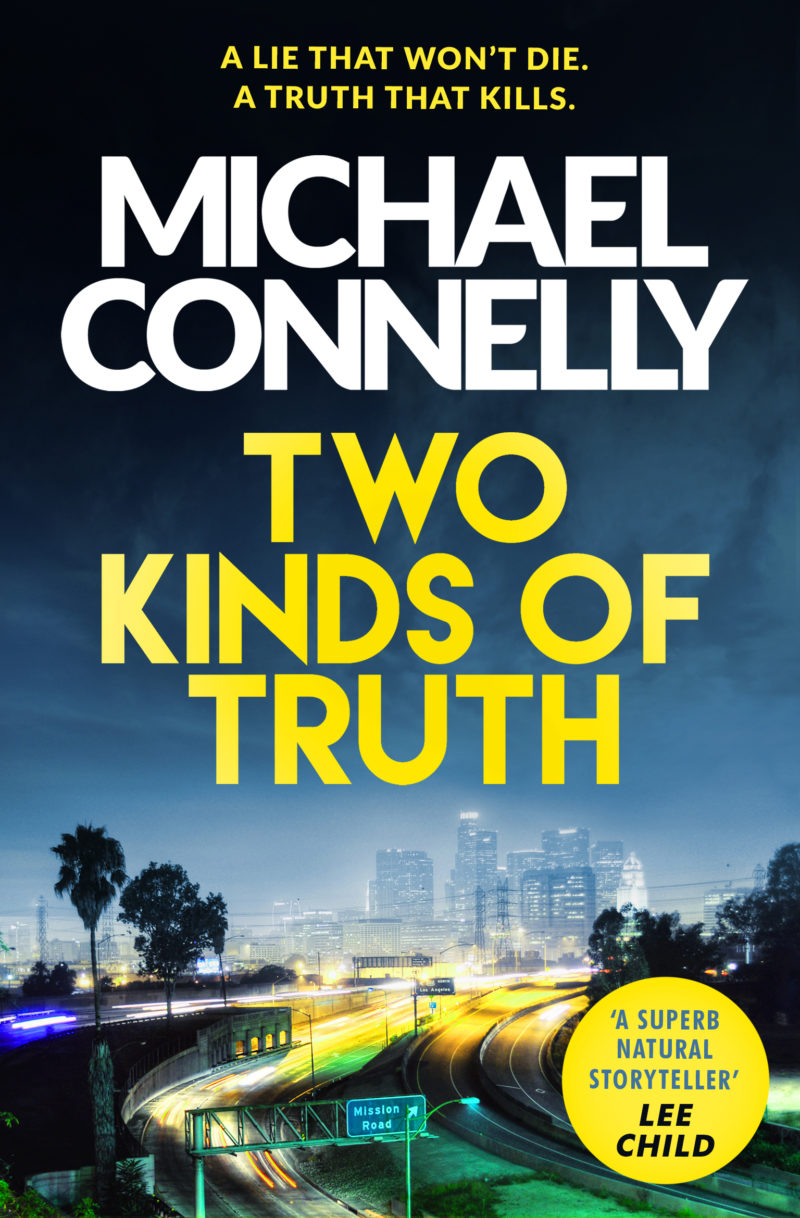